All About Jazz (USA) Live-At-JazzCase 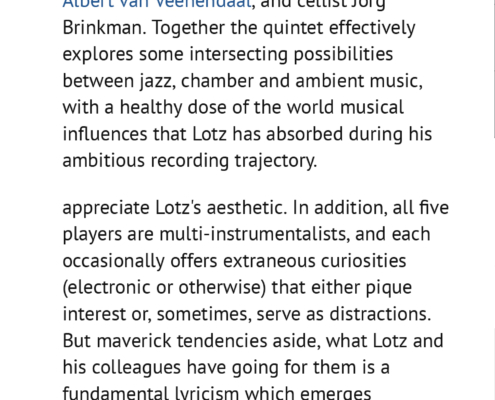 Lotz Of Music: Live At JazzCase

With an upbringing that involved living in Thailand, Germany and Uganda, it was perhaps inevitable that flautist Mark Alban Lotz would take a global approach to his craft as a musician. His substantial recorded output (over a dozen releases to his name, to date) bears ample witness to his restless quest for new forms of expression, while always remaining at least tangentially rooted in the jazz tradition. On his latest release, a live recording from JazzCase in Dommelhof, Belgium, Lotz is fortunate to partner with similarly free-thinking associates. These include percussionist Alan Purves —with whom he has worked before, most recently on 2018’s Food Foragers (Unit Records)—clarinetist Claudio Puntin, pianist Albert van Veenendaal, and cellist Jörg Brinkman. Together the quintet effectively explores some intersecting possibilities between jazz, chamber and ambient music, with a healthy dose of the world musical influences that Lotz has absorbed during his ambitious recording trajectory.

There are eight pieces here, each with thematic and idiomatic fluidity. The opening moments of “Of Royal Herring” generate a mood of ambiguity and mystery, as the players tentatively establish their footing, occasionally drawing together and sometimes fanning out to pursue their individual ideas, before eventually settling into a composed segment, with Lotz and Puntin at the forefront, and a strong rhythmic underpinning beneath them to give the piece its pulse. Before long the group is in full flight, with an energized drive that reveals Lotz’s well-honed jazz sensibility. Other tracks go in very different directions: “Quasimodo” somehow combines a chamber-music aspect with a basic danceability, with Purves’s percussive touches and Veenendaal’s prepared-piano fueling the piece’s spirit; “Strollin’ a Reef” uses a laid-back swinging groove to animate Lotz’s most impassioned solo of the concert.

The music does cover a lot of stylistic ground, making it very hard to pigeonhole, which is all to the good. A sense of the unexpected goes a long way in helping a listener appreciate Lotz’s aesthetic. In addition, all five players are multi-instrumentalists, and each occasionally offers extraneous curiosities (electronic or otherwise) that either pique interest or, sometimes, serve as distractions. But maverick tendencies aside, what Lotz and his colleagues have going for them is a fundamental lyricism which emerges especially during the album’s more restrained moments. “Nistru,” for instance, begins winsomely, highlighting Lotz’s penchant for melody, particularly in dialogue with Puntin, even as the piece gradually builds in intensity during a torrid middle section. And “Improvisation” is an understated gem, with Brinkman’s sensitive pizzicato lines supporting Lotz’s and Puntin’s most delicate playing of the record.

The album ends with a nice bit of fun, as Puntin’s jaw harp provides the bouncy foundation to Brazilian Hermeto Pascoal’s “Egg Jam Encore,” where the group gets to turn it loose with a bit of Latin-flavored infectiousness. Pascoal is a legendary multi-stylistic multi-instrumentalist in his own right, and it’s perfectly appropriate that Lotz and company draw on his muse to conclude this wide-ranging, engaging set of music.

Press on Lotz Of Music