Fantastic review and fotos by Dr. Thoralf Winkler on the Duo concert of the duo Lotz/Purves at Freie Klänge Magdeburg, Germany

“The music of Purves and Lotz offers a great deal of a completely new listening experience and imagination. The music is fun, seduces to join in and to imitate. … meditative in everything experimental, … “

“Some listeners sit with their eyes closed, let the richness of sound on them, others look fascinated to the musicians.”

“But the mysterious gentle melodies of the two remain more memorable, … What can be heard, however, is an almost spiritual experience: out of a buzz of sound, spherical sounds are transmitted to the ear, becoming quieter until it is quiet.” 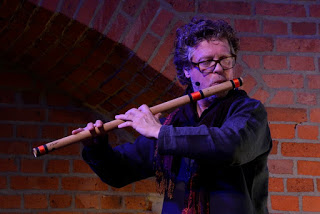 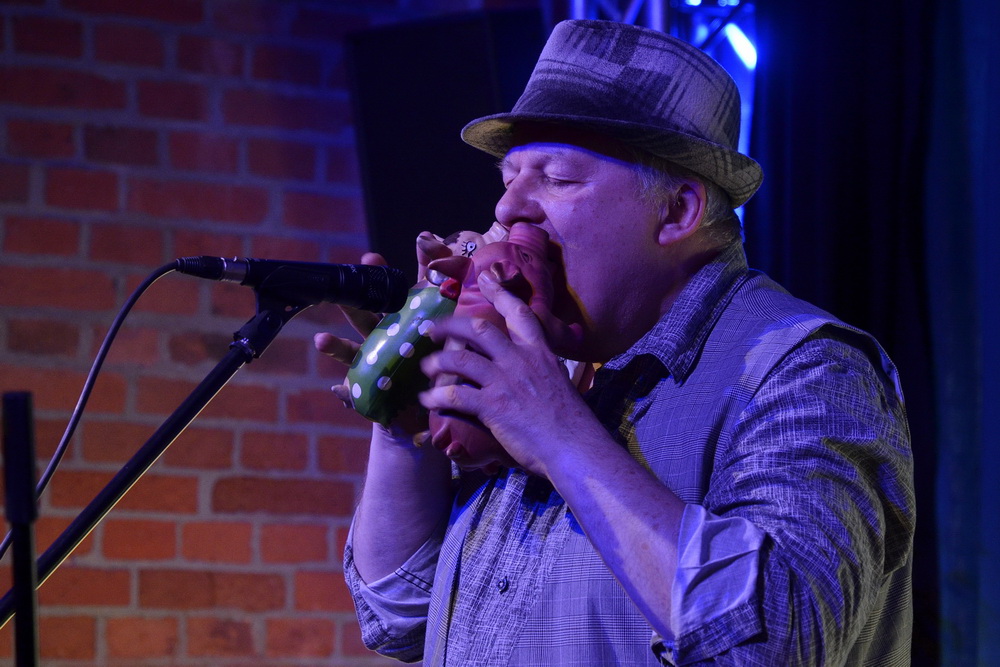 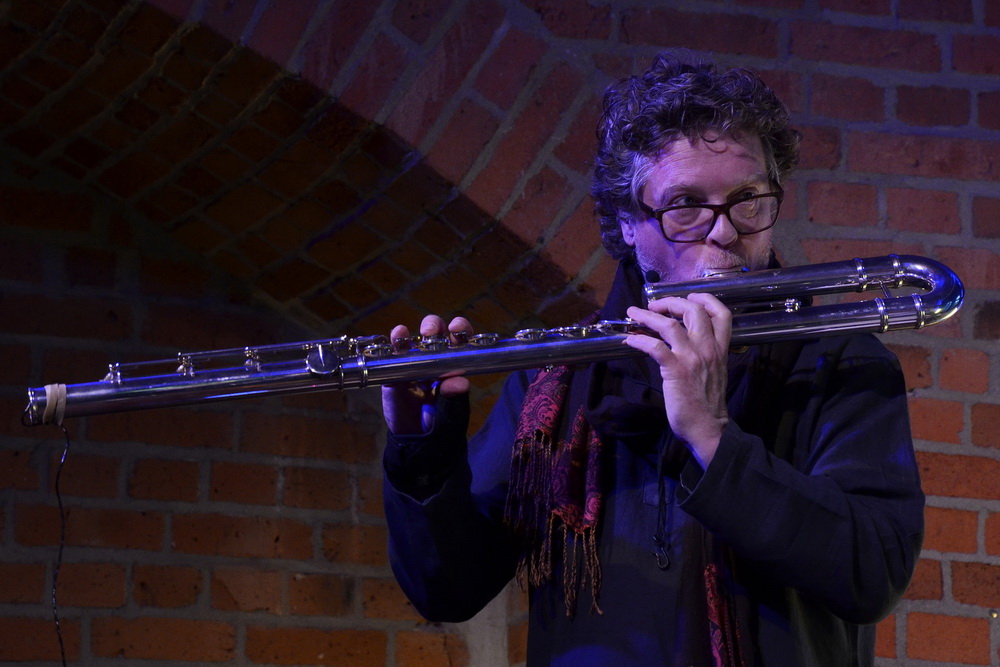 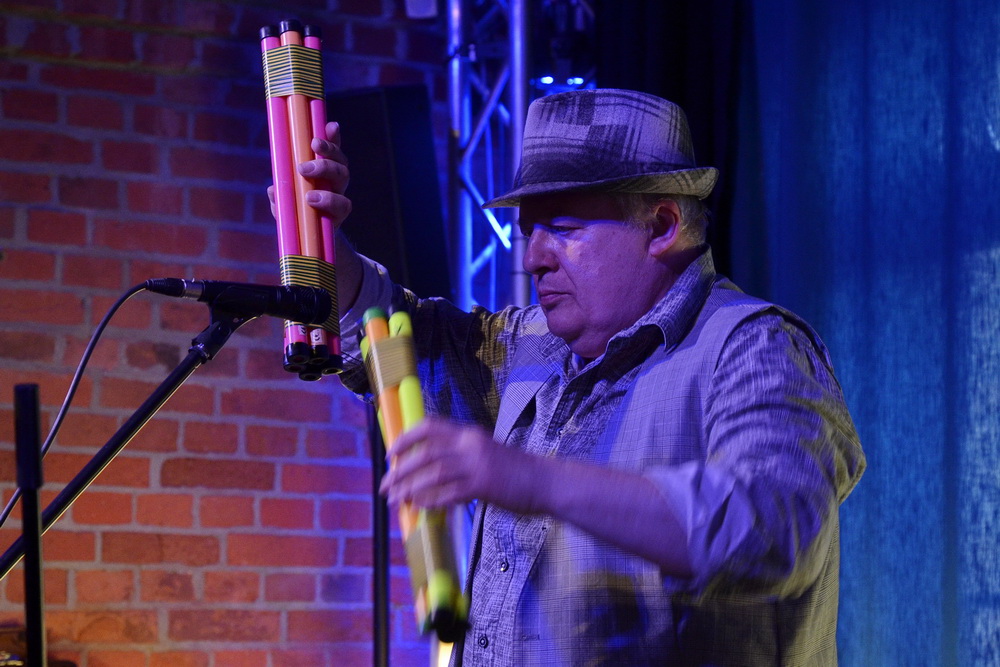 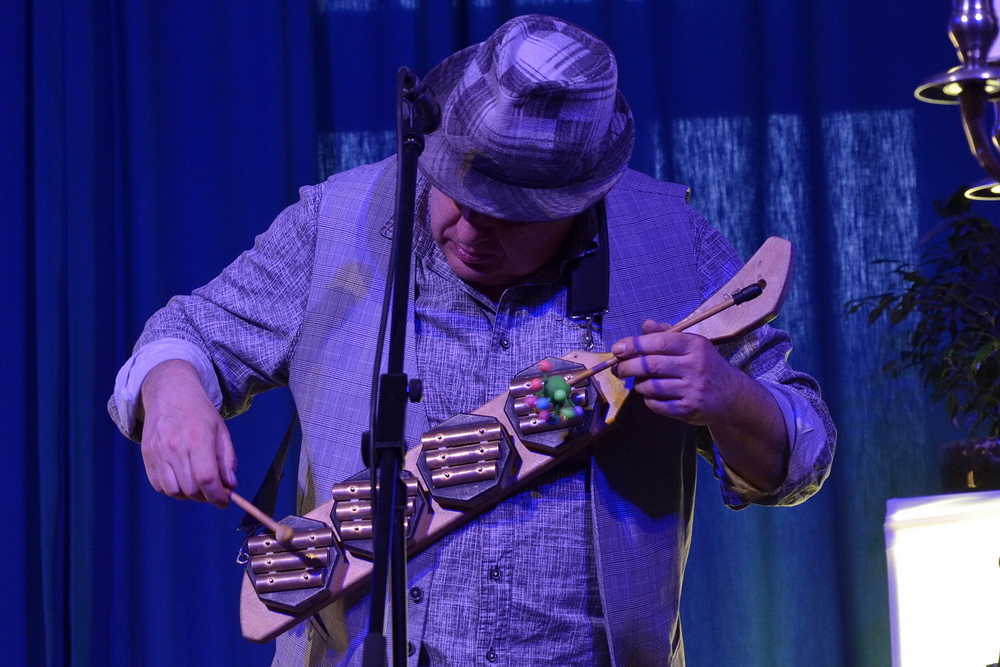 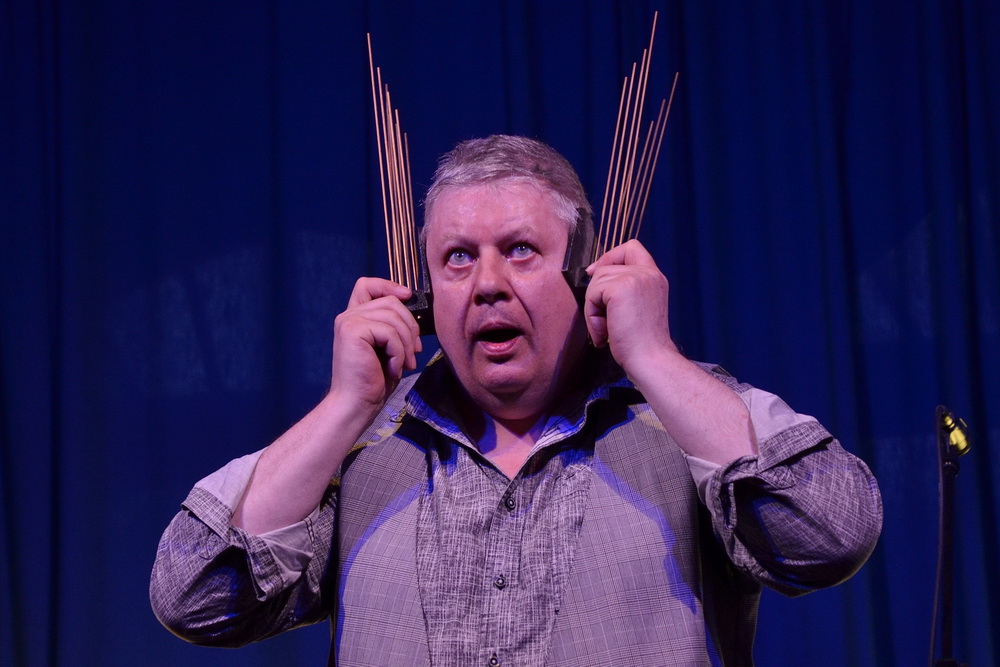 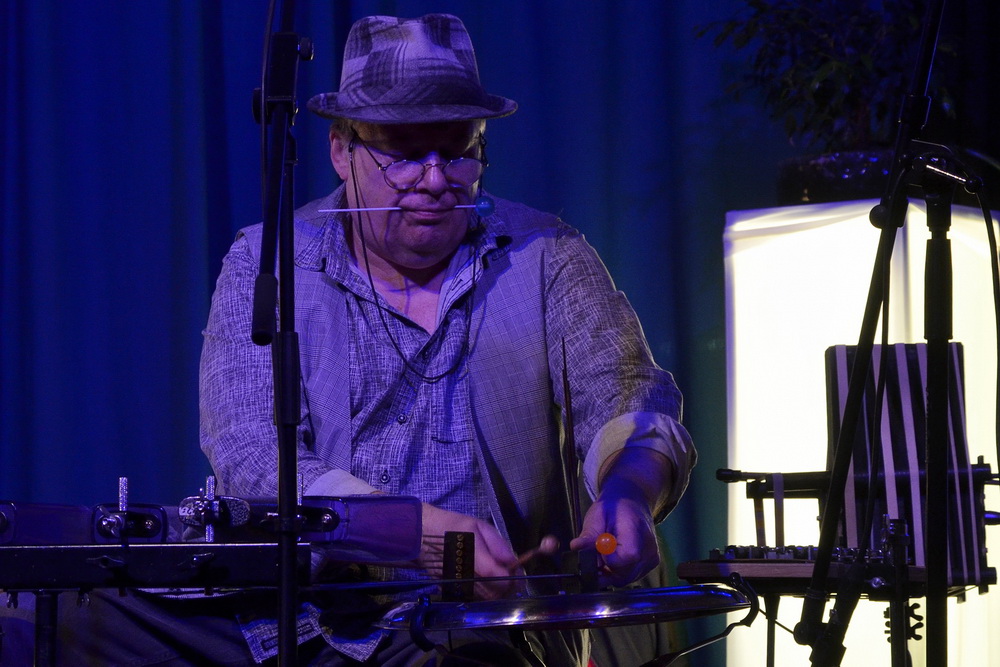 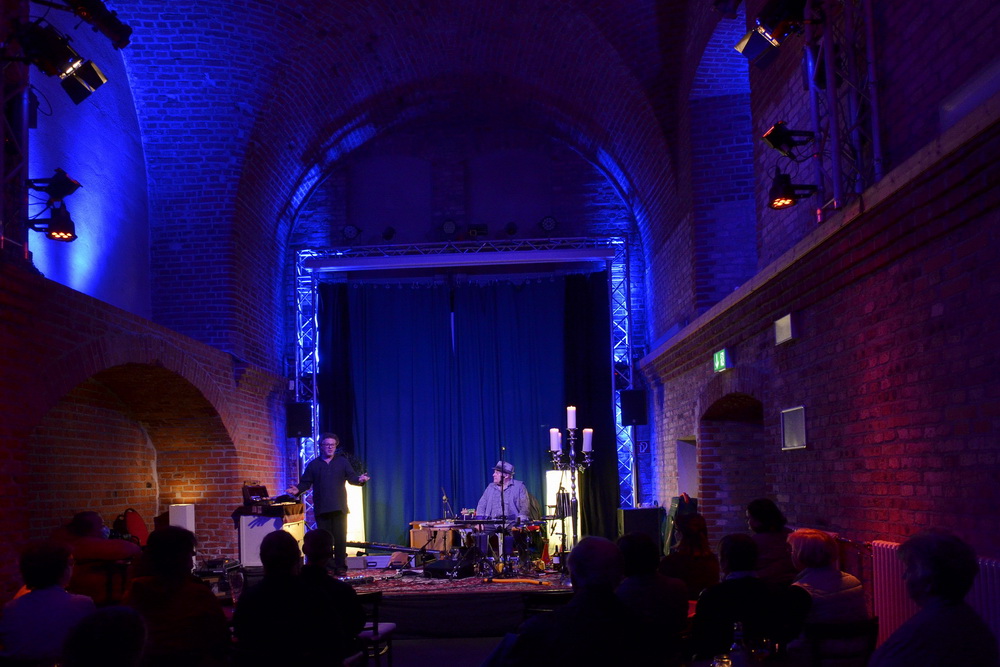 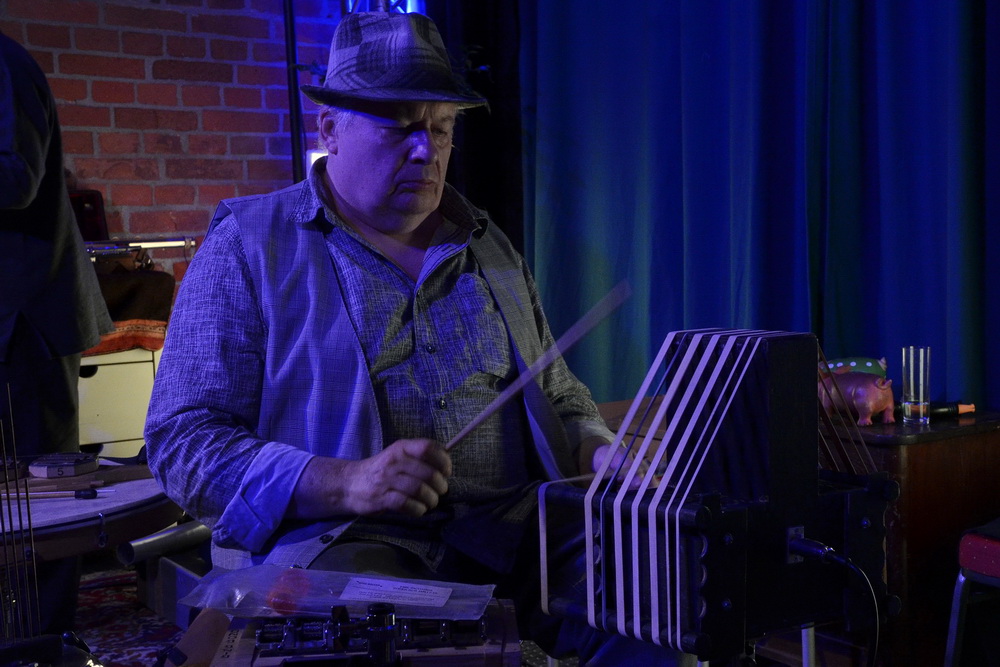 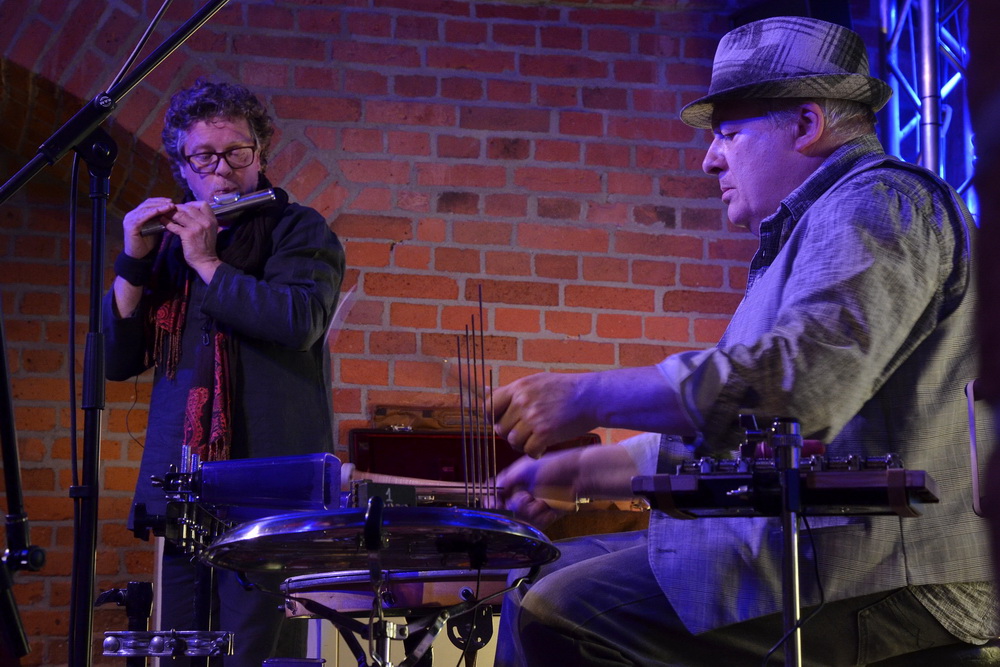 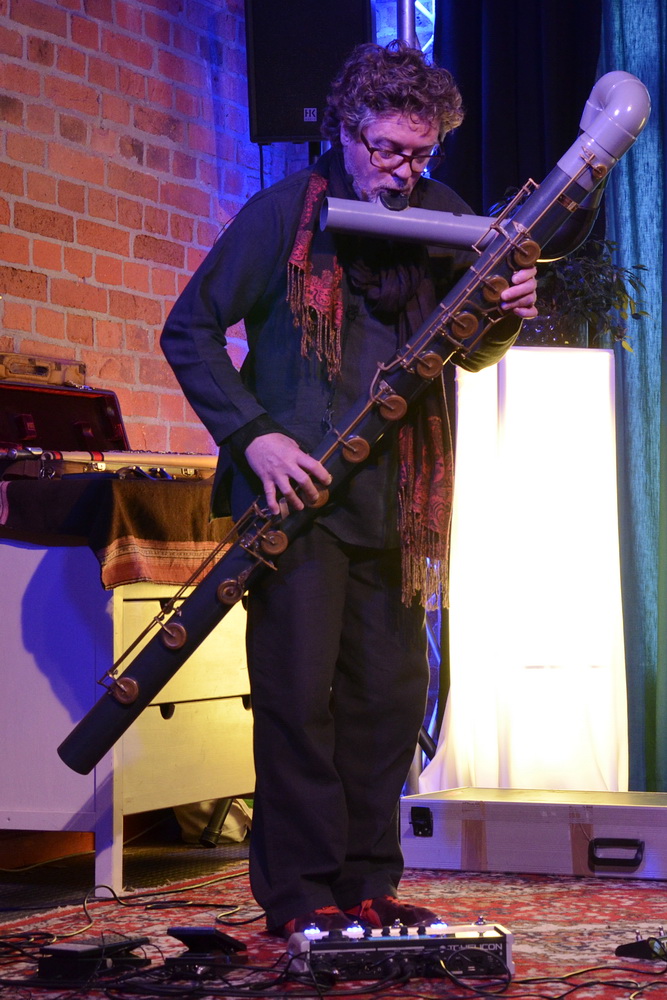 Experimental and audible need not be a contradiction. Two hours of crazy musical ideas mixed with harmonious melodies: it was a pleasure to listen – and watch.

Mark Alban Lotz came on stage with his huge double-bass flute, an instrument that looked at the origins of the hardware store (later he explained that the instrument maker actually used plastic sewage pipes, which he combined with flaps of a saxophone). He plays the low tones in a loop station, which then, through the constant repetition, sounds like the breath of a great prehistoric animal. Alan “Gunga” Purves takes a music box in each hand, such small tin cans that everyone has ever bought as a toy for his children, holds them to the cranks and turns them rhythmically, adding snapping tones. Through this combination, Lotz plays notes on his slightly smaller bass flute – and now jungle sounds fill the room, the rumble of a nearby thunderstorm, birdsong and whistling of tree frogs.

Later, to the tunes of a converted accordion, whose bellows Alan Purves uses with his feet, producing on-drone sounds for Alban Lotz’s flute, the ear, which seeks to familiarize itself with familiar sounds, hears out tunes like Debussy’s “Afternoon of a Faun”. But what is already “normal”, what is “known” in this imaginative play with sounds and sounds? The music of Purves and Lotz offers a great deal of completely new listening experience and imagination. And she is fun, seduces to join in and imitate. Because, seriously: who has never played harp on an egg cutter or blown glass bottles? The seemingly so simple to combine rhythm and music is then the great art of the two.

In the sounds of Gunga Purve’s sound box, one sometimes thinks of listening to a bagpipe, sometimes there are metallic floating sounds or an electronically amplified bass drone. At the same time, the music has something meditative in everything experimental, not least because of the constant repetition of sound sequences. Some listeners sit with their eyes closed, let the richness of sound on them, others look fascinated to the musicians.

Mark Alban Lotz accompanies a mini-accordion with a piccolo, Alan Purves plays rhythms on xylophone and clap boards, from which a Scottish dance accompanied by the flute gradually develops. Later he grabs one, then two rubbery wines, which he squeezes rhythmically and inflates with his mouth, giving sounds somewhere between squealing and grunting. A hooliganism, which at first sight (and in the truest sense of the word) is saukomisch and yet intention is, always part of the music remains, never to Klamauk becomes. Again and again one hears (and sees) new sound effects in which one’s mouth remains open in amazement.

fter the concert break, Warnfried Altmann, creator of ideas and organizer of the Free Sounds, addresses precisely this creativity and imagination and places them in a new context: “That’s exactly what the economy needs, they can get involved in new things, create and invent new things”. And also the poem recited by him after the break, Eva Strittmatter’s “Chagal”, fits in with Eva Strittmatter’s imaginative language.

After the break, Lotz and Purves bring the audience back into the meditative mood. With only two tones blown on bottles, played alternately and in the rhythm of calm breathing, they provide for relaxed rest. When Mark Alban Lotz plays strong notes on his transverse flute, the music sounds romantic.

Immediately thereafter, it gets wild again, as Lotz reaches for various pipes, as they are used as a decoy in hunting to mimic calls of foxes or deer. All of this is laid out in a loop as a loop and accompanied by Alan Purves, evoking associations with nightmare scenes by Hieronymus Bosch. But the mysterious gentle melodies of the two remain more memorable, for example when Purves brushes his hands over an entire ensemble of small music boxes (those from the souvenir collection with favorite tunes between Mozart and Beatles), which easily turns the sound rollers and new from this mixture of melodiesamples creates. This mechanical sampling is an implementation of today’s music production back into the analog world. Metallic sounds come from a kind of xylophone guitar, bellows blowing flutes and slow blues on the contrabass flute. At the end of the concert, Alan “Gunga” Purves picks two bells from pendulum clocks that might have been the Westminster Gong in the past. Like a shaman, he walks slowly from listener to listener, lightly beats the staff bells and holds them to the listener’s left and right ears, the same distance the antennas are from the head. What can be heard, however, is an almost spiritual experience: out of a buzz of sound, spherical sounds are transmitted to the ear, becoming quieter until it is quiet.

As an encore, there are sounds of this time battled with sticks and bells of the contrabass flute. A mixture of Asian music and whale songs runs through the vault of the fortress Mark.

I would not have thought it possible beforehand how fascinating this music is, which for the most part is very far away from listening conventions, rather produces sound images. Even now, as I hear the CD of the two of them writing these lines, I see the two musicians in front of me, Mark Alban Lotz with his huge flute and Alan “Gunga” Purves with his imaginative and at the same time so calm and natural handling of everything where you can create bumps and rhythms.

MusicFrames on The Wroclaw Sessions
Scroll to top
X