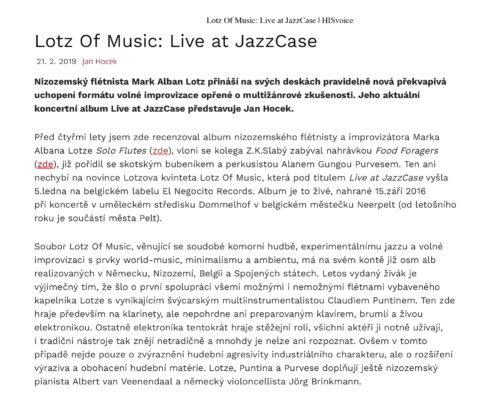 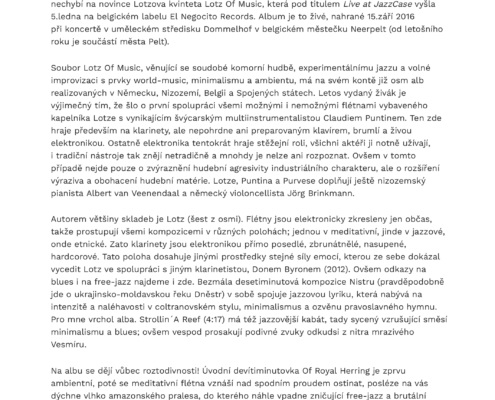 Lotz Of Music: Live at JazzCase

The Dutch flutist Mark Alban Lotz brings on his recordings a surprising new view on the format of free improvisation based on multi-genre experience. His current concert album, Live at JazzCase. by Jan Hosek.

Four years ago, I reviewed the album of Dutch flute player and improviser Mark A. Lotz Solo Flutes (here), my colleague Z. K.Slabý did the same last year with the recording Food Foragers, which he had made with the Scottish drummer and percussionist Alan Gunga Purves. Lotz Of Music was released on January 15 on the Belgian label El Negocito Records, under the title Live at JazzCase. The album is live, recorded on September 15, 2016 at a concert at the Dommelhof artistic center in the Belgian town of Neerpelt (this year is part of the town of Pelt).

Lotz Of Music, dedicated to contemporary chamber music, experimental jazz and free improvisation with elements of world music, minimalism and ambient, has released eight albums in Germany, the Netherlands, Belgium and the United States. This year’s release is exceptional because it was the first collaboration with all the possible and impossible flutes featured by Lotz, with the excellent Swiss multi-instrumentalist Claude Puntin. He plays here mainly on clarinets … In addition, electronics play a pivotal role this time, all actors use it, and the traditional instruments sound unusual and often can not be recognized. However, in this case, it is not only about highlighting the musical aggressiveness of an industrial character, but about the expansion of the expressive and the enrichment of the musical matrix. Lotz, Puntin and Purves are complemented by Dutch pianist Albert van Veenendaal and German cellist Jörg Brinkmann.

The author of most of the songs is Lotz (six out of eight). Flutes are distorted electronically only occasionally, so they penetrate all the compositions in different positions; once in meditative, else in jazz, others ethnic. Clarinets, however, are electronically obsessed, shriveled, squeezed, hardcore. This position is attained by other means of the same power of emotion that Lotz was able to conjure up in collaboration with another clarinetist, Don Byron (2012). However, links to blues and free jazz can be found here as well. The almost ten-minute composition of Nistru (probably the Ukrainian-Moldavian Dniester River) combines jazz lyrics that take on intensity and urgency in Coltrane stylistic, minimalism and the echo of the Orthodox anthem. For me the top of the album. Strollin’ A Reef (4:17) also has a jazz coat, here with full of an exciting blend of minimalism and blues; with underneath strange sounds from somewhere inside the freezing universe.

The album is totally decadent! The first nine minutes of the Royal Herring is at first ambient, then the meditative flute is floating above the bottom stream of ostinato, then you will breathe in the damp rain of the Amazon rainforest, which suddenly ravages the devastating free-jazz and the brutal clarinet solo. Quasimodo (3:58) has a ‚Jarman’istic mood, when the exuberance is absorbed by the marvelous fusion of atonal music with the evocation of the medieval market, at the end of the deliciously submerged ambient feel. In Waiting For Prey you will get a sharply cut rhythm, a relaxed piano and a single-faced ambient surface over all the reflection of the rising sweat of fear and horror. In the end, there is a release, from which a jerk, a joy, sparks out. Brinkmann and Puntin contributed a richly structured Improvisation, variously thickened and dirty, bouncing and beating. Tamago, which is an expression of traditional Japanese egg omelet, sounds sinister, frightening, sometimes frightening, and ultimately even childlike. A similarly unshakable Lynch postmodern piece is the final The Egg Jam Encore, with the whimpering sound of a rumble, a whistle and a prepared piano, where the drums sound like a pot, a flute like the mouth of a shepherd, and it is still accelerating. It’s raw and raw. Some offense of madmen …