The year 2019 is particularly productive in record terms for Mark Alban Lotz, a German flutist based in the Netherlands, where, similarly, important names of this family of instruments, such as Ronald Snijders and Peter Guidi, have settled. If in January he had already released “Live at the JazzCase”, which documents a live performance in the Belgian city of Neerpelt, with the most emblematic of his projects, Lotz of Music, now returns in a trio format with “The Wroclaw Sessions “.

A tentacular flautist who divides his activity through innumerable projects (which extend to Portugal), Lotz pursues an idiosyncratic view of music and instruments, assuming himself as a globetrotter. Its approach is based on the creative processing of elements from classical music, traditional music from various parts of the world and jazz, understood in a broad perspective and open to contaminations of various kinds, in a multidimensional whole that does not lose coherence.

In this record, which the musician assumes as his return to jazz, is accompanied by two young Polish musicians, bassist Grzegorz Piasecki (who proposed to Lotz the idea of ​​recording together, something that was not planned) and the drummer Wojciech Buliński. What is being heard is the result of a single studio session held in March 2018 in the city of Wroclaw, the historic capital of Silesia, which was not without its setbacks: Lotz came from several intense days of concerts and workshops and the drummer had a high fever (at one point he was even sent home, which motivated the three duets flute / bass). But the chemistry that quickly settled among the musicians overcame the setbacks and a session that began informally culminated in fresh music and broad horizons.

If Lotz’s most recent records were clearly influenced by the exploratory stance of a Robert Dick, of whom he will be a natural continuator, this is especially the echoes of Yusef Lateef, Sam Rivers or even Eric Dolphy that are unveiled. We are facing a trio in which the flute avoca natural protagonism, but with bass and drums with enough room for intervention. The flute does not overwhelm, but rather interacts in balance of forces with the rhythm section.

The selected repertoire is heterogeneous and therein coexist their own compositions, revisions of other works and free improvisations. An excellent read of “Euterpe” (composition of Sam Rivers originally included in the inescapable “Contours”, recorded in 1965) opens the disc and soon puts high the bar. “Franz” reveals a more modest atmosphere, translated by the melodic beauty of the lines drawn by the flute, the sober contrabass, the contained percussion. In “Raaste Men,” a composition credited to Lotz and the Indian flutist Hariprasad Chaurasia, we tune into an Eastern ancestry that invites introspection. Flute and double bass make “Lullaby for Tymon” a moving song of wrapping.

Equally worthy of note are the joyful, almost dancing swing of “Pata Pata”, South African song-emblem Miriam Makeba, and the reading of Charlie Parker’s “Segment”, which begins slow, almost austere, but quickly gains a lively bop with a “drive” imposed by a boisterous rhythm section, which a rampant flute rides. Again in duet, “Song of Delilah” resumes the familiar tune of Victor Young’s song for the epic “Samson and Delilah” (1949) by Cecil B. DeMille. In absolute contrast, “Slap, Kick & Stop” is a more experimental cutout vignette, bridging the latest Lotz records, using less conventional techniques. A rewarding album full of musicality and adventure. 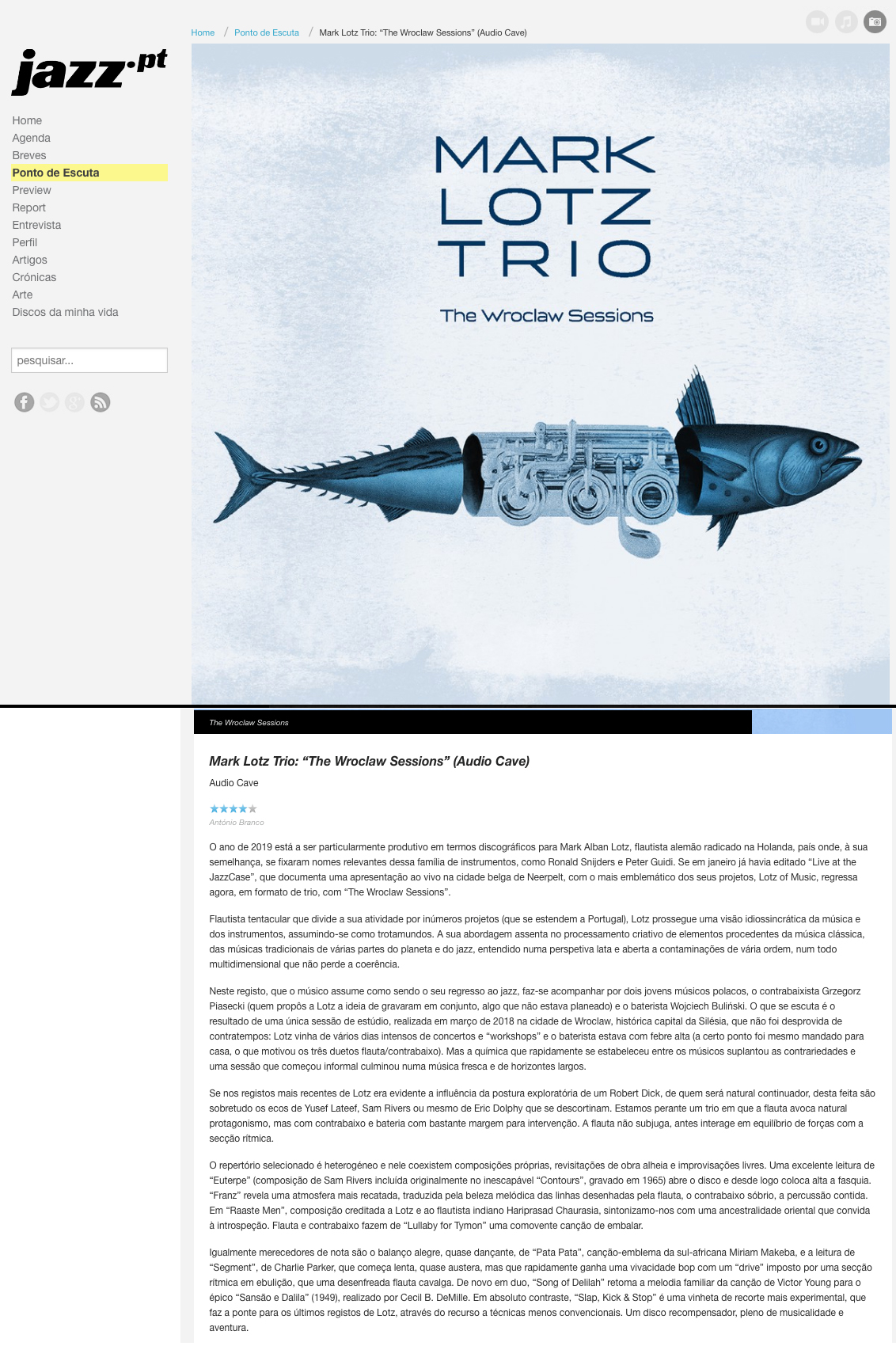 Point Of Departure on The Wroclaw Sessions

Lizard Magazyn on The Wroclaw Sessions
Scroll to top
X