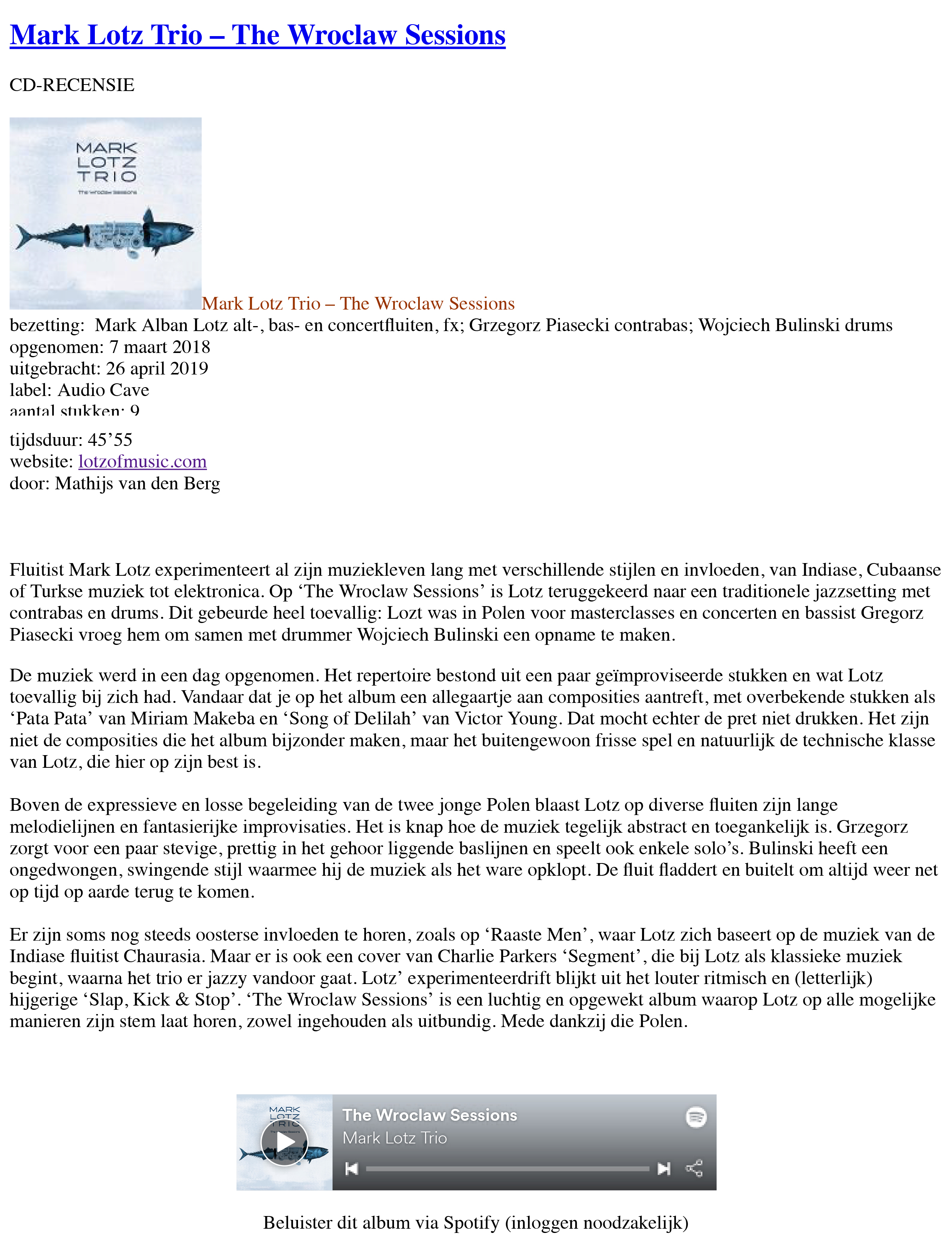 Flutist Mark Lotz has been experimenting throughout his music life with various styles and influences, from Indian, Cuban or Turkish music to electronics. With ‘The Wroclaw Sessions’ Lotz has returned to a traditional jazz setting with double bass and drums. This happened quite accidentally: Lotz was in Poland for masterclasses and concerts and bassist Gregorz Piasecki asked him to make a recording together with drummer Wojciech Bulinski.

The music was recorded in one day. The repertoire consisted of a few improvised pieces and what Lotz had accidentally with him. That is why you will find a mixed compilation of compositions on the album, with well-known pieces such as “Pata Pata” by Miriam Makeba and “Song of Delilah” by Victor Young. However, that did not spoil the fun. It is not the compositions that make the album special, but the exceptionally fresh performance and of course the technical class of Lotz, which is at its best here.

In addition to the expressive and loose accompaniment of the two young Polish musicians, Lotz blows his long melodies and imaginative improvisations on various flutes. It’s great how the music is abstract and accessible at the same time. Grzegorz provides a few firm, pleasant bass lines and also plays some solos. Bulinski has a casual, swinging style with which he almost beats the music. The flute flutters and tumbles to always return to earth just in time.

Sometimes Eastern influences can still be heard, such as on “Raaste Men”, where Lotz relies on the music of the Indian flutist Chaurasia. But there is also a cover of Charlie Parker’s “Segment”, which starts with Lotz as classical music, after which the trio takes off to jazz. Lotz’s urge to experiment appears from the purely rhythmic and (literally) gasping “Slap, Kick & Stop”. “The Wroclaw Sessions” is a light-hearted and cheerful album on which Lotz makes his voice heard in every possible way, both restrained and exuberant. Thanks in part to those Polish musicians.