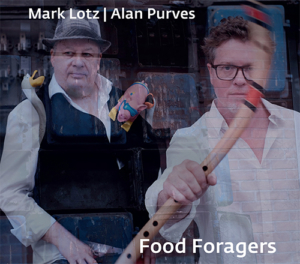 Percussion, toys and surprising sound objects meet the family of of flutes and electronics. Music ranges from minimal to jazz, noise and world.

His Voice, Czech Republic
“Full of imagination and full-hearted emotions.”

Vera Vingerhoeds. The Netherlands
„Unconventional music in a never ending quest for extravagant sounds on the instruments.”

Fluit, The Netherlands
„No CD sounds like the one before with Lotz! With every release he surprises us again with new ‚never heared before‘ sounds. A very special CD!“

Fons-Immortalis, Germany
“Not only are the instruments colorful, so is the music. Quiet and harmonious performances meet now and then discreet electronic inserts. Meditative sound spheres alternate with rhythmic and percussive songs, and with the song “I Am Sorry Blues” there is a real catchy tune. Moreover, it is straightway magical, with which soulful elegance Mark Lotz elicits gentle, fantastically beautiful melodies from the flutes.”

Sands-Zine, Italy
“Jugglers of sounds. What is most surprising is a sobriety that seems to contrast with the number of gadgets used and, consequently, with an overall wealth in sounds that is unequaled. I begin to believe that the names of Lotz and Purves are a guarantee.”

Il Manifesto, Italy
“Purves lavishes on an incredible range of percussions and toys, while Lotz plays different types of antique and modern flutes, along with an innovative sound. The duo embraces throughout the album a philosophy of experimentation with obscure reminiscences (and Dadaists) inventing a kind of new ethno-free or postmodern world music.”

Ken Vos, Jazzism, The Netherlands
“It’s the sense of dynamic and playful interaction that makes you poke the ears after each beginning of a piece. Most of the pieces are finished before the boredom could strike at all. The two longest pieces are two beautiful examples of building  atmosphere.”

Jazzthing, Germany
“It is a extraneous and peculiar world that the German flutist Mark Lotz and the Scottish percussionist Alan Purves design here. {cut} Crisp noise experiments meet mysterious melodies that Lotz may have collected on his various world journeys. {cut} Together with Purves Lotz conjures esoteric miniatures between folkloric beauty and {cut} avant-garde.”

Diário do Alentejo, Portugal
“Emotion Machine. Hypnotic percussions, enchanting melodies and sounds of uncertain provenance co-exist in this construction of an emotional kaleidoscope that is capable of transporting us to distant geographies as well as to the secret world within us.”

Jazzarium, Poland
“Sparkles with ideas. With his unrestrained imagination, rich arsenal of techniques and instruments, Lotz found in Alan Purves (along with his set of toys, his impeccable playing technique and his vigilance) as a perfect match for playing endless musical fun.“

Jazzweekly, UK
“You get a sense of these guys are kids playing with toys in a closet as they pull out something to form a chase scene on the galloping …“

Fons-Immortalis, Germany
“Incredibly varied and pointed music. I am touched by the intensity and seriousness. {cut} the result is overwhelming.”

The Whole Note, Canada
“… to mention just the first four tracks, there’s never a dull moment. {cut} After a truly wondrous journey a final highlight is the concluding I’m So Sorry Blues, a standard 12-bar riff pairing the contrabass with tin whistles. Intriguing!”

Jazznu, Netherlands
“Musicians who have disregard on conventions are thinly sown. The Netherlands has at least two.”

Longplay, Poland
“55 minutes takes us to an alternative reality, created by music we have never known before.“

Jazznu, Netherlands
“Food Foragers is a penetrating document, which is certainly improvised à la Purves and Lotz, but also honors melody and harmony. Coupled with the repository of cultures that are affected, it yields an interesting piece of music. On which both musicians still let go of their runaway imagination, but certainly their craftsmanship is wrenched from all pores. The title piece Food Foragers appears to be a blues with a pig, Belly Buttons a second traditional melody from Mali and Lullaby For Time a threatening, underground sounding expression. All this from the box of two unfortunately – sometimes – unsung geniuses.”

“Musicians who have disregard on conventions are thinly sown. The Netherlands has at least two.”

“55 minutes takes us to an alternative reality, created by music we have never known before.“

“Incredibly varied and pointed music. I am touched by the intensity and seriousness. The result is overwhelming.”

“Emotion Machine. Hypnotic percussions, enchanting melodies and sounds of uncertain provenance co-exist in this construction of an emotional kaleidoscope that is capable of transporting us to distant geographies as well as to the secret world within us.”

“Penetrating document. All this from the box of two unfortunately – sometimes – unsung geniuses.” 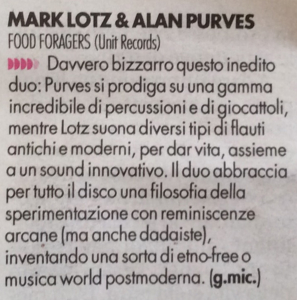