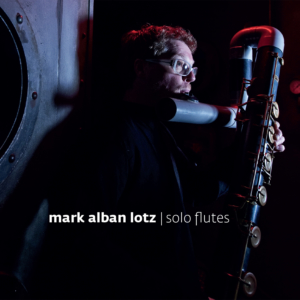 17 tracks of flute solo performances of contemporary music in compositions and improvisations. Everything is played in one go, live and the use of extended techniques on flute. Including six ‘Bass Flute Sequenzas’ – explorations on the sounds inside the pipe of the bass flute.

(all compositions by Lotz)

Draai Om Je Oren, 10/2014, The Netherlands, J.Los
“With the very first beat of the CD you already are fully mesmerized. Mark Alban Lotz is the grand master, a great improviser on all kinds of flutes. {cut} – magnificent solo recital. It’s no small feat to fill a CD as fascinating and surprising with only ‘Solo Flutes’.”

Jazzweekly, USA, 8/2014, George Harris
“You gotta have either a) chops b) chutzpah or c) perfect timing for a horn player to successfully do a solo album. Flautist Mark Alban Lotz throws down the flute gauntlet, and pulls off an impressive salvo.”

The New York City Jazz Records & Jazzwords.com, Ken Waxman, USA, 10/2014
“Add the name of … Mark Alban Lotz to the very short list of flute virtuosi who can single-handedly animate a recital. {cut} What Lotz plays may not be pure jazz or pure anything but his skill and versatility should attract lots of attention.”

Sand-zine, Italy, 8/2014,Henry Gramadge
“Unusal techniques, preparations of the instrument and other parameters give the 17 tracks an extremely varied life, even in the six bass flute sequences. … I ask even those who do not love flutes to listen to this disc and get reconciled with this tool. Preaching to the already converted (flute lovers) would be too easy.”

Radio 808, 7/2014, Croatia
“Mark Alban Lotz, a brilliant flutist, one of the new names in the virtuous circle of European improvisors. Evoke the concept of the best solo instrumentalists, …”

Jazz.pt, 5/2014, Portugal, Antonio Branco
“Reveals himself as an interesting sound architect of a different kind!”

Jazzenzo 5/2014, The Netherlands, Rinus van der Heijden
” … literally: a mantra on a piece of PVC pipe. So beautiful, you can make music as well. … a repository of influences , waywardly picked together by this great ‘going his own way’ instrumentalist, penetrating performed.”

His Voice Magazine 5/2014, Czech Republic, Jan Hocek
„One of the most agile experimental jazz instrumentalists. His flute performance is an inexhaustible tool of free expression, breaking down musical boundaries.  …The expressive range on this album is astonishing. … presents the purest (and most honest) form of free improvisation. It is inviting you to an adventurous trip into the realm of sounds, tones and colors.”

Jazzflits, 8/2014, The Netherlands, P.J.Korten
„A quirky and playful album by a ‚race improviser’. With ‘Solo Flutes ‘ he made an album that despite, or perhaps because of the extreme diversity, is very fascinating.”

Jazzhalo, Belgium, 5/2014, Herman te Loo
“Lotz does not loose himself in this multitude of atmospheres, playing techniques and genres. He maintains his position as a musician of the 21st century, who does not need to pin himself into one direction, so long as he is recognizable. And that’s Mark Alban Lotz certainly, in his role as a musical storyteller, with a playful, understated sense of humor.”

rated four stars, Leeuwaarder Courant 6/6/2014, Jacob Haagsma
“This CD certainly is no freak show, Lotz does not forget for one second to make music.  A very nice listening album.”

Rootstime, 6/2014 Belgium, Jan van Leersum
“Intriguing music with a great sense of humor. Another fine piece of work of this master improviser, tribute!”

Jazzarium, Poland 7/2014, Piotr Rudnicki
“There are artists of really high class which should be considered. One of these artists undoubtedly is flute virtuoso Mark Alban Lotz. …  In addition to technique and his mastery of the instrument Mark Alban Lotz reveals taste, lightness and a large musical imagination, which builds involuntarily a growing curiosity for a possible subsequent album. … Mark Alban Lotz without a doubt is “one of a kind “.”

Vital Weekly, The Netherlands 8/2014, Dolf Mulder
“All these ingredients together make this one a very rich album with a lot to discover and enjoy. Everything is recorded in one go, using no overdubs or loops. Chapeau!”

Uni/Jazz Magazine, Czech Republic, 9/2014
“Some Solo CD seem to be a collection of players want to prove what it is possible on their instruments. Not so in the case of the CD Solo Flutes! Mark Alban Lotz is a virtuoso seducer. … His latest solo excursion, we can call a ‚flautistic diadem’ with seventeen compositions full of provocative explosiveness and exuberance. Fascinating because, among other things peppered with six sequences for bass flute. These are humorous, joking, almost on the border of calamity, toys, puns, including shouted screams in dialogue with his instrument. … Music of insistence – away from all trials – a sample of Lotz wide skills. Asking questions while at the same time earthy.”

All About Jazz, 8/2014, USA, E.Hareuveni
“The inventive approach of Lotz with his wide array of extended techniques—…—turn these concise pieces into highly vivid, cinematic pieces. … An arresting tour in the hidden worlds of flutes.”

Nieuwe Noten, 10/2014, The Netherlands, Ben Taffijn
“Lotz is a virtuoso on the flute, so the conclusion after listening to this album.”

Revue & Corrigée, 9/2014, France, Pierre Durr
“There still are musicians, who have already a long career in music, but who have not yet, curiously enough, crossed the restricted scene of the unique alternative and improvised music, though they are also practitioners! The German flutist Mark Alban Lotz is one of them them. Fifteen albums under his name or as a co-leader, represent an impressive business card, especially as he also emerges in nearly fifty other recordings.”

CKUT, 6/2014, L.Jospeh
“…it is among the best I have heard this year in terms of musicality and creativity, thanks again!”

Citizen Jazz, Franpi Barriaux, 9/2014
” In recent years, Mark Alban Lotz establishes himself as being one of the most prominent improvising flautists of Europe. He has retranslated every language in its various formations, Lotz Of Music or its recent meetings with the Turkish quartet Islak Köpek. … the virtuosity never overrules, very personal. The album allows the flutist to dive with humor in the depths of his pipes, to become one with them and to subdue all states. A great discovery, which has its share of strangeness and talent.”

Bad Alchemy, Germany 12/2014
“The horizon and rich allusiveness on Solo Flutes is also global and total. He does a lot, if not everything, to circumvent and outplay current flute clichés.”

Salt Peanuts, 8/2014, Norwegia, Jan Granlie
“There is no doubt that we deal here with a flutist who knows how treat the different flutes. To me it sounds like modern classical music, or music of a soundtrack to a film, more than jazz.”

Le Son Du Grisli, Luc Bouquet, 2/2015 France
“Pure Thriller here, find a Tarkovsky’ish slowness somewhere else. Lotz is a filmmaker of breath, a wise man you can not decently blame his ‚travel bulimia’. This CD is neither a business card or postcard, but a CD of high breaths, intimate, sensitive, visible.”

Jassepoes, 7/2014 Belgium, Kris Vanderstraeten
“This fifty-minute CD … has no dull moment. An absolute must as it is a real firework in the scanty contemporary music landscape.”

Neue Zeutschrift für Musik, E.Schwindt, 3/2015 Germany
“… implies that Lotz will lead us to a little-known world of exotic beauties and he actually succeeds! The word of the ‚new worlds of sound’ usually picked up in the context of contemporary music is quite worn out, but with Lotz it is entitled.”

Moors Magazine, 2014, The Netherlands, Holly Moors
„ … flawless musical feeling, resulting in evermore thrilling improvisations and compositions. One hour solo flute, looks on paper quite dull, in practice it is extremely exciting and varied. And do not forget one thing : this is not heavy avant-garde, in the first place this is primarily just tremendous music!”

TheFlashBoston, 5/2014, USA, G.Marschal
“With a cultured Dutch daffiness, he explores zoological and anthropological motifs on his Solo Flutes. …  So many solo records can be austere, or just plain pretty. It’s sweet, deep, and humorous.”

Flute Focus, 5/2014, UK, P.Westbrook
“Many jazz flutists dare to include avant-garde abstractions in their improvisations these days, few avant-garde artists have the courage to embrace the simple and the concrete. Pure Genius.”

Lowflutes.com, Australia, P.Sheridan
“This artist, fine flutist and overall creative genius is redefining the sonic palette of all flutes. His understanding and feeling for the use of extended techniques is extraordinary. A must recording for the lovers of new sounds and cool grooves. I cannot wait for the next album.”

“The word of the ‘new worlds of sound’ usually picked up in the context of contemporary music is quite worn out, but with Lotz it is entitled.”

“So many solo records can be austere, or just plain pretty. It’s sweet, deep, and humorous.”

“An absolute must as it is a real firework in the scanty contemporary music landscape.”

“Music of insistence – away from all trials.”

“There are artists of really high class which should be considered. Mark Lotz without a doubt is “one of a kind “.”

„One hour solo flute, looks on paper quite dull, in practice it is extremely exciting and varied.”

“This artist, fine flutist and overall creative genius is redefining the sonic palette of all flutes.” 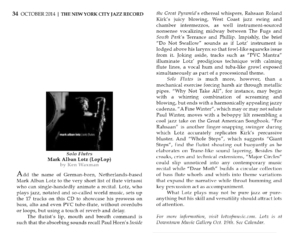