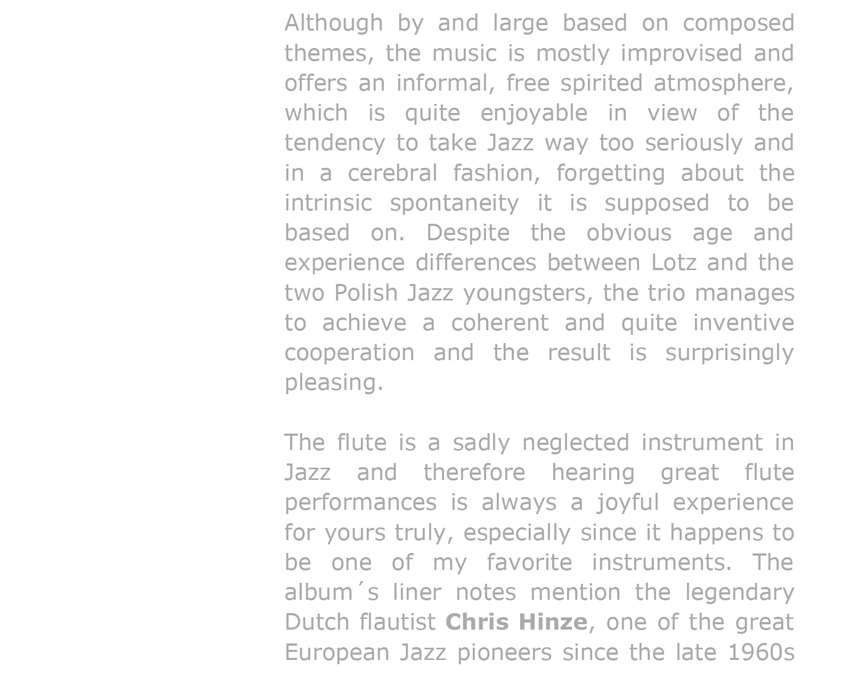 The Soundtrack Of My Life (Israel)

This is the debut album by a trio led by veteran German (resident in Netherlands) flautist / composer Mark Alban Lotz with Polish bassist Grzegorz Piasecki and drummer Wojciech Bulinski. The music was recorded during an impromptu recording session, organized while Lotz gave master classes in Wroclaw. The album presents nine tracks, six of which were recorded by the trio and three by a duo of Lotz and Piasecki due to Bulinski´s illness. Two of the tracks are composed / co-composed by Lotz, two others are co-composed by Lotz and Piasecki and five are Jazz / Pop standards.

Although by and large based on composed themes, the music is mostly improvised and offers an informal, free spirited atmosphere, which is quite enjoyable in view of the tendency to take Jazz way too seriously and in a cerebral fashion, forgetting about the intrinsic spontaneity it is supposed to be based on. Despite the obvious age and experience differences between Lotz and the two Polish Jazz youngsters, the trio manages to achieve a coherent and quite inventive cooperation and the result is surprisingly pleasing.

The flute is a sadly neglected instrument in Jazz and therefore hearing great flute performances is always a joyful experience for yours truly, especially since it happens to be one of my favorite instruments. The album´s liner notes mention the legendary Dutch flautist Chris Hinze, one of the great European Jazz pioneers since the late 1960s and a superb player / composer, which of course bring on fond memories. Lotz has an impressive recorded legacy, which sadly I am not all too well familiar with, but his biography and interest in World Music is certainly reflected in the music present on this album.

Overall this is a document of a moment captured in the studio, which is definitely worth investigating, even if it does not offer any grandiose revelations. It is honest, well played and interesting Jazz music, spirited and enjoyable, which obviously deserves to be captured for posterity. An absolute must for Jazz flute connoisseurs, obviously!